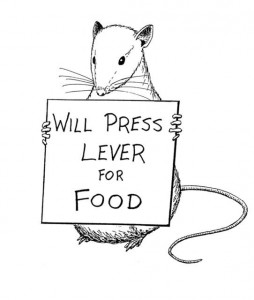 Behaviorism is a learning theory that only focuses on objectively observable behaviors and discounts any independent activities of the mind. Behavior theorists define learning as nothing more than the acquisition of new behavior based on environmental conditions.

Experiments by behaviorists identify conditioning as a universal learning process. There are two different types of conditioning, each yielding a different behavioral pattern:

There have been many criticisms of behaviorism, including the following:

This theory is relatively simple to understand because it relies only on observable behavior and describes several universal laws of behavior. Its positive and negative reinforcement techniques can be very effective– such as in treatments for human disorders including autism, anxiety disorders and antisocial behavior. Behaviorism is often used by teachers who reward or punish student behaviors.

Behaviorism is often seen in contrast to constructivism. Constructivists are more likely to allow for experimentation and exploration in the classroom and place a greater emphasis on the experience of the learner. In contrast to behaviorists, they feel that an understanding of the brain informs teaching.

Easy Recipes for Kids: Cooking as a Learning Experience