Is there a way for kids to once again have a BLAST! with science?

Devlin, an Emmy-award winning filmmaker, is in the midst of releasing an educational version of his film BLAST!, which follows his brother, Mark Devlin Ph.D., as he attempts to make history and completely change our currently held views of the entire universe.

The statistics regarding the American lag in education, particularly as it pertains to science, are troubling, to say the least.

Recently, a report was released showing the U.S. is continuing to fall behind many other countries not only in science, but also math, engineering and technology.

When compared to 65 other industrialized nations, America scored 35th in terms of science-based test results in 2012. Countries including Estonia and Hungary outscored U.S. students.

America used to be on the cutting edge of innovation, as well as science education, and experts point to a number of factors as reasons this has dwindled. Major reasons many experts agree are contributing to the decline include lack of teacher specialization in the subjects they teach, high rates of teacher turnover and a lack of early childhood education programs, present in many of the countries that outperform the U.S.

There’s also the commonly held American attitude that with science and similar subjects, including math, not exceling in these areas is because of a lack of innate ability, whereas countries that score well tend to have the perception that regardless of natural talent, hard work can help students succeed in these areas.

Alan I. Leshner, who serves as the CEO of the American Association for the Advancement of Science, recently told the New York Times that one of the best ways to improve K-12 science education is by showing students the nature of how scientists works. He went on to say:

“Students also need to know some high-level core concepts: like evolution and what genes are and how they work. In order for that to happen, you need teachers personally immersed in science. And to do that, you need to restructure the reward system for teachers so that K-12 teaching becomes a viable, respected career alternative for people trained in science.”

In past decades, the world’s attention was captured by our exploration of space and the “great unknown,” but even this type of research and interest is no longer what it once was, particularly among students.

Unlocking the Secrets of the Universe

While our nation has a long way to go to rebuild our science education programs, BLAST! is a great educational resource to once again spark student’s interest in exploring and researching what isn’t yet known about our world and our universe.

The exciting documentary follows Mark Devlin and his team of researchers as they attempt to launch new telescope technology into space, utilizing NASA high-altitude balloons. BLAST, which stands for Balloon-borne, Large Aperture, Submillimeter Telescope, is one of the most advanced and sensitive telescopes ever designed, and it’s the only one currently able to float in the atmosphere, gathering particular information about ancient galaxies. 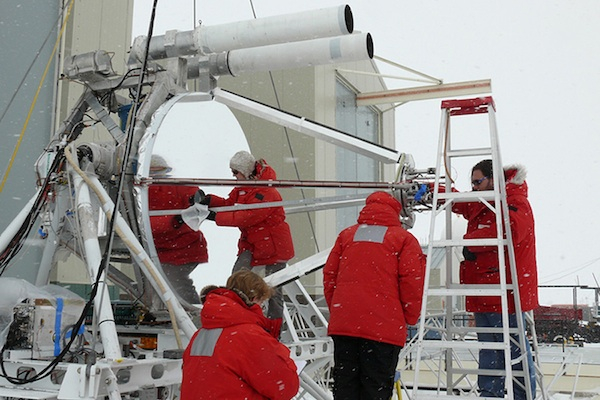 The work being done by the team behind BLAST has the capability to go far beyond the Big Bang, and the research conducted by the Hubble telescope, in order to show what was happening in the universe billions of years ago.

The ultimate goal of the rigorous work done by the researchers, as they travel across five continents, is to delve into the secrets of the universe and explore galaxies not yet discovered.

According to Mark, astrophysicists have the opportunity to revolutionize how we see ourselves within our universe. He points to the potential for the BLAST experiment to lead to some of the biggest scientific discoveries since we learned the Earth is not the center of the universe.

This documentary goes beyond the typical space or science-related movie, and provides a real sense of excitement and intrigue.

Through this excitement, there’s the potential to use the film as a tool in science education and once again create students who are interested and engaged in science, and finding answers to mysteries plaguing the world.

The educational version of BLAST!, which is set to be released soon, will be a great tool for parents and teachers alike, striving to foster a sense of interest in these topics.

Next month, we’ll be interviewing filmmaker Paul Devlin, to provide a little more insight into the process of making the film, and how he feels it has the potential to influence education, so check back.

Should I Use iBooks Author to Create My eBook?

Should I Use iBooks Author to Create My eBook? Read More