How Tests Are Killing Education

The conventional wisdom is this: you go to school for 12+ years, you do well, maintain good grades, get into a good college, where you continue to perform well and you’re then rewarded with a great job.

Despite this belief, we’re seeing more Millennials than ever who are jobless, or working at jobs for which they’re theoretically over-qualified for, while people who may not have even completed college are being sought after for high-profile careers.

So why isn’t the standard equation working anymore? Why isn’t it enough to get a good education, participate in some extracurricular and get into a good college?

There’s clearly a disconnect between education and what it takes to succeed in today’s highly competitive job marketplace, and for an increasing number of people that disconnect lies in how America is educating its students.

Education is now synonymous with testing. Students, from the very earliest years of their education are faced with a barrage of standardized tests, with Arne Duncan, the U.S. Secretary of Education calling our current system a “picture of educational stagnation.”

His comments were made in response to the results of the 2012 Programme for International Student Assessment, in which U.S. students ranked 26th in the world in math, 21st in science and 17th in reading.

Despite Duncan’s response to the scores, the answer to these abysmal test results seems to be more testing. 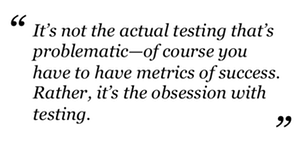 There are a number of components at play in these scores of course. For example, some people such as Dennis Van Roekel, President of the National Education Association, pointed to the impact of the number of poor students in the American education system.

Affluent schools, if tested alone would have placed America as one of the highest ranking countries on the International Student Assessment. This shows that yes, poverty does play a role, but that doesn’t account for the fact that students in Vietnam, an extremely poor country, actually outperformed U.S. students in math and science.

More and more educators are pointing to what Randi Weingarten, head of the prominent teacher’s union American Federation of Teachers, calls “hyper-testing.”

Unlike American standardized tests, the PISA test relies more on open-ended question answering and critical thinking skills—something that American students simply don’t seem to be prepared to grapple with.

What Standardized Testing Means for Education

Standardized testing, while it was designed to provide measurable standards, and school and teacher accountability, has quickly become the number one enemy of education in the opinion of many.

Experts say it’s not the actual testing that’s problematic—of course you have to have metrics of success. Rather, it’s the obsession with testing.

From day one, as soon as a student enters the classroom, test prep begins. There’s no focus on actually teaching material, because the teachers themselves don’t know the material that’s going to find its way onto the tests from year-to-year.

Instead, the focus is about teaching students how to take tests. They learn, day after day, how to fill in bubbles, and utilize test taking strategies.

These tests lack real world applications, and students aren’t taught a real connection between what they’re being tested on and how it impacts their lives.

Teachers aren’t able to speak to the individual needs and learning styles of students because their time, energy and resources and solely dedicated to ensuring their class passes the standardized tests. Every student is forced to learn the same way, and the result isn’t even an improvement in skills such as math and science. Instead, the U.S. education system, a hub of testing, continues to decline year after year.

Recently Laszlo Bock, who serves as the senior vice president of people operations for Google, gave what was a shocking interview for many.

He’s the go-to guy if you want to get a coveted position at Google, and he told The New

York Times what he’s looking for in employees.

Google is one of the largest companies in the world, so surely they want the best and brightest, but how do they assess that?

It’s not how you’d think.

Bock told the interviewer he bases his hiring decisions not on GPA, or even whether or not applicants graduated from college. In fact, the number of people at Google without college degrees is on the rise, and at the time of the interview he estimated as many as 14% of the employees were without a college degree.

Instead, he chooses people with the ability to use their cognitive ability and reasoning skills to make decisions quickly. He also looks for leadership and qualities that point to the applicant’s ability to take charge in a situation, but also step back and let others take the reins when it’s more appropriate.

To Google, having these qualities means you’re someone who’s able to learn, which Bock sees as central to being an innovator. You’re not constantly repeating the same behaviors over and over again, in hopes of getting the same results.

Instead, you’re taking the opportunity to learn in ways that will then help you become a better leader and innovator.

These concepts aren’t exclusive to Google. As American companies continue to try and remain competitive in an increasingly challenging global marketplace, innovation is the key to success. There is no other option.

Yet, despite this reality, innovation is completely discouraged in the American education system, so how are students expected to bridge this gap?

The War Between Education and Innovation

Education in America has become completely focused on operating on auto-pilot. Students and teachers are rewarded for not thinking outside the box. There’s no time to participate in meaningful discussions and activities with real relevance. 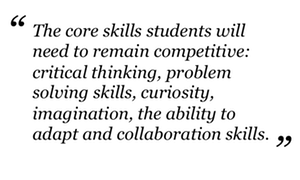 Instead, the classroom experience is about learning to fit inside a mold created by standardized tests, and students are increasingly unprepared to become leaders or innovators, yet the survival of the American economy relies on an innovation-based economy.

He outlined the core skills students will need to remain competitive, including critical thinking and problem solving skills, curiosity and imagination, the ability to adapt, and collaboration skills.

By contrast, Wagner sees our education system as one, that largely as the result of standardized testing, encourages individual achievement, aversion to taking risks, passive learning and extrinsic motivation—all of which are in complete disagreement with innovation.

Educators continue to grapple with the subject, with experts like Wagner saying the answer is not more of the same. The magic formula to a better education system doesn’t lie in creating more tests or more uniformity in the classroom. Instead, he points to the idea that the system needs an entire overhaul. He doesn’t just believe these are simple changes. Instead, he and many others are encouraging a complete overhaul of a system that is clearly broken, yet year after year, politicians and education leaders on both sides of the political spectrum continue to be at a loss for how these changes can be made.

What about you, what do you think about standardized tests?

3 Responses to How Tests Are Killing Education