Current Events for Kids: How the Marijuana Talk is Transforming

Posted on May 5 2014 by Ashley Sutphin Watkins

Marijuana is a hot topic right now. There’s lots of theoretical and policy debate surrounding the issue. For example, how does the legalization of marijuana impact drug use, should non-violent people convicted of drug use be granted clemency, and what is the real impact of marijuana or marijuana addiction on our health, both short and long-term?

Marijuana is becoming a readily available drug, and not something that can be avoided. This makes it more important than ever for parents to have open and honest discussions with their children about its use.

For decades, parents have primarily included marijuana in their “Say No Drug” talks with kids, but how are those talks changing as society’s view of the drug evolves?

Marijuana has been used for thousands of years for various purposes, whether it’s recreationally or medicinally. Until very recently, in America, and throughout the world, it’s been classified as an illegal substance, with stiff criminal penalties in many cases.

Colorado and Washington became the first states in the U.S. to legalize recreational marijuana use, and now a number of other states are weighing whether or not they should follow suit.

Voters in these states decided to let for-profit companies begin selling the substance. While many people believe the Netherlands has legalized marijuana use, in reality it is against the law even there—drug laws just aren’t strictly enforced. That makes Colorado and Washington historic in their decision to legalize its recreational use. 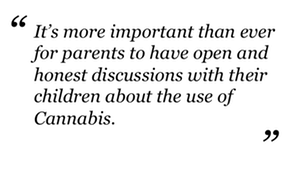 Along the same lines, the Obama administration recently broached the idea of granting clemency to tens of thousands of people previously convicted of non-violent drug offenses throughout the country.

While attitudes on marijuana seem to be relaxing, there’s also new research to contend with, about the potential harmful effects of using the drug. Common wisdom seems to view the use of marijuana as much safer than other drugs, and also safer than excessive use of alcohol, however a new study published in the Journal of the American Heart Association says even recreational use of the drug can lead to cardiovascular problems, and even death.

A separate study also just garnered a lot of attention because it demonstrated even casual use of marijuana can lead to brain abnormalities in young people.

Many parents are disturbed to hear the startling fact that marijuana use among teens is actually rising. A federal report released at the end of 2013 showed that while teens’ use of alcohol and other drugs is on the decline, marijuana use is becoming more prevalent. As part of a federal survey, Monitoring the Future, it was reported more than 12 percent of eighth graders and 36 percent of seniors said they had smoked pot in the past year.

60 percent of seniors who responded in the survey also said they didn’t see it as harmful, which was up from 55 percent during the previous year.

How To Start a Conversation About Cannabis

Since marijuana is such a hot button issue right now, it’s extremely complicated to talk to your kids about it. On the one hand, state and federal governments seem to be giving it the okay, while researchers are saying it could be more detrimental than previously

It’s also become important to talk to even very young children about this issue,particularly as a fourth grader in Colorado was recently discovered to be selling marijuana to classmates.

Regardless of your personal beliefs about the legalization of marijuana, how do you approach the subject with your kids?

To begin, gauge your children’s feelings and experiences when it comes to pot, by asking some questions like these:

Tips for Tackling a Tricky Subject

In the past, the marijuana conversation for most parents was somewhere along the lines of “don’t do it ever” or the “just say no” mantra of the 80s.

Now, it’s a different world and parents have to adapt in order to have an effective conversation with their kids about the topic. When you’re approaching the topic, consider the following tips:

What’s most important for parents to take away is the fact that yes, the marijuana discussion is evolving, but that doesn’t make it irrelevant. It can become even more complicated and confusing for kids to understand at this point in our history, so parents need to be more involved than ever when it comes to tackling the topic.

What about you, how do you tackle this subject with your kids?

Want to Reduce Bullying? (Some Things You Should Know)

Want to Reduce Bullying? (Some Things You Should Know) Read More

Getting a Great Book Cover Inexpensively and Quickly Read More