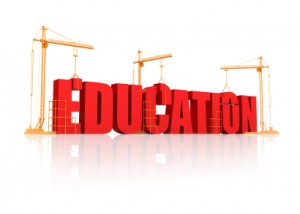 The classroom is taught the way it is today because of the different ‘ages’ in history. Ages like the Industrial Revolution and Information Age have had profound and lasting impacts on the history of education.

Teaching methods are beginning to change, ever slowly, however.

“Over the last two hundred years, the common school and its one-size-fits-all curriculum have evolved into a larger union school with wide course offerings,” according to School: The Story of American Public Education, a PBS series.

But classrooms still have a long way to go.

Education in the Industrial Age

In the Industrial Age, education was handled much differently than today. There were one room school houses and farming was the main livelihood in society.

This age changed what was required from the workforce. Society needed lots of people to work in factories and so the factory model of learning was established. The factory concept applies directly to education today. Companies needed to provide somewhat educated workers and the principles of mass production were implemented. The factory model was a system of education. These companies took a person, trained them and when the person came out at the end of the training, they were certified to go work in the factory setting.

Also popular during the Industrial Age was the mass production model, which focuses on scoring well on exams and essentially memorizing data to repeat it at a later time.

Besides the mass production model, the popular psychology term behaviorism also came into play in the educational sector. 20th century teacher and researcher B.F. Skinner believed in behaviorism, a concept that states that anyone can learn anything and the mind of the learner is blank.

Skinner believed a person’s prior experience was irrelevant and that a capable instructor can break down any concept, repeat it and any person can learn it, regardless of the knowledge they had before. John B. Watson was the founder of behaviorism.

Additionally, Skinner worked with operant conditioning, which correlates to enforcing behavior in school children today. If a child is asked to stay after school for acting out in class, this would be an example of operant conditioning. The student would see that he or she will get punished for their actions and they may be unlikely to commit whatever act they did that got them in trouble, again.

Skinner, however, also had the idea that positive reinforcement was better than punishment. By not necessarily rewarding the student and instead praising him or her for positive behavior, Skinner would have found this more beneficial because of the general definition.

The principles of operant conditioning are still used to explain teaching and learning techniques used in the classroom today.

“Positive communication is a tool to reinforce good behavior and eliminate bad behavior; it builds self-esteem and inspires confidence in children,” according to Family Education.

The education of the Industrial Revolution Era did not last, simply because things change, especially with a new Age of time.

The Age of Information took the country by storm in the 1970s. Noam Chomsky believed behaviorism did not make sense and he aimed to prove the point that people are not born with a blank slate or an innate ability to learn. He believed a person would learn a language whether they liked it or not. With Chomsky’s new behavior code, people began to have a whole new way of looking at how students learn.

Drawing from experience: From Laura Ingalls to Noam Chomsky

The days of the Little House on the Prairie one-room schoolhouse may be over, but today’s challenges are new. An educator must consider the mind of the learner. It is not always one size fits all learning. Students have different learning styles and instead of focusing on the current ‘age,’ educators may need to tailor diverse learning styles to individual students. This philosophy allows teachers to draw from their experience, instead of using a comprehensive approach that may not suit every student.

Chomsky believed that there were some things no amount of learning could teach. In an interview from 1983, he said there was a relationship between heredity and the environment for the progression of human language.

“The language organ interacts with early experience and matures into the grammar of the language that the child speaks. If a human being with this fixed endowment grows up in Philadelphia, as I did, his brain will encode knowledge of the Philadelphia dialect of English. If that brain had grown up in Tokyo, it would have encoded the Tokyo dialect of Japanese. The brain’s different linguistic experience — English versus Japanese — would modify the language organ’s structure,” Chomsky said in the interview.

Going ahead into the next few decades, many technological advances will be made. These advances, such as the release of the iPad, may change the factory model into a workshop one, some suggest.

Others aren’t nearly as convinced.

“The model is premised on the belief of “progressive” educators that the best way to encourage deep and enduring understanding is through “discovery learning” in a small-group setting, where students puzzle out problems and acquire knowledge on their own,” according to a New York Teacher.

Therefore, what will happen with the history of education in the future is still yet to be determined. But one thing is for sure: with a multitude of theories and various ways of teaching created by educators, there certainly seem to be many ways for students to learn and adapt in the classroom.

What You Should Know About Standardized Testing Read More

You Majored in What?! Read More

Our current education system dates back to the Industrial Revolution. At the time, our country… Read More