The Legacy of Fear: Test Scores Rise in Washington, D.C. (As Does Suspicion) 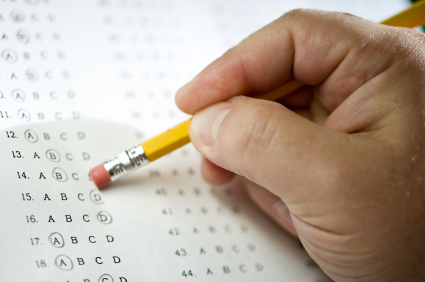 “When it seems too good, you know it might be untrue.”

A recent article published in USA Today, “When Standardized Test Scores Soared, Were the Gains Real?” is nothing if not disturbing. Under the dictatorial leadership of former superintendent of schools, Michelle Rhee, many Washington, D.C. schools saw dramatic increases in their standardized test scores. The Crosby S. Noyes Education Campus was a poster child for school improvement – narrowly defined as “higher test scores” – and praised lavishly by Rhee. (When I say “praised lavishly,” that’s not hyperbole. In both 2008 and 2010, each teacher at Noyes received an $8,000 bonus and the principal received a $10,000 bonus. Makes you want to pump up those test scores, doesn’t it?)

Well, it appears that test scores weren’t the only thing that rose dramatically at Noyes. McGraw-Hill, the testing company that administers tests in D.C., discovered that Noyes had significantly more “wrong-to-right” erasures than would be expected. In other words, answer sheets from Noyes were much more likely than other answer sheets to show evidence that wrong answers had been erased and changed to correct answers. In 2007-2008, six of the eight classrooms at Noyes taking tests were flagged for significantly high wrong-to-right erasures. In the following two years, 80% of the classrooms showed unusually high wrong-to-right corrections. How significant was the deviation? Statisticians consulted by USA Today reported that there was a better chance of winning the Powerball grand prize than having that many corrections made by coincidence.

When Rhee met with school principals each year, she informed them that she expected them to improve test scores by a minimum of 10%. And Rhee wasn’t your typical boss who made idle threats. During her 3-year stint in D.C., she fired more than 600 teachers and dozens of principals. Many others left of their own volition. When Rhee left office in 2010, only about 55% of the employees had started working in the D.C. public schools before she began. That’s a boss who follows through on threats made. “That’s not a threat; that’s a promise” might have been her refrain.

I am not suggesting that principals cheated or encouraged teachers to cheat. I am, however, suggesting that the temptation to cheat must have been great and it’s easy to imagine some succumbing to incredible pressure. Think about it for a minute. You have a powerful, coercive boss who demands an increase in test scores of at least 10%. She has shown a willingness – if not a perverse satisfaction – in firing those who do not measure up. It’s not difficult to imagine any teacher or principal doing what was necessary to avoid dismissal and pick up that fat bonus check.

Admittedly, I’m looking at this from a distance. I’ve never worked in the D.C. schools. So listen to teachers who have worked at Noyes. They have been there. Ernestine Allen, who taught for five years at Noyes said, “You wonder how it is that this student got such a high score,” after watching that same student struggle with academics on a day-to-day basis. Another teacher told USA Today that there is a “total disconnect between what scores showed and what I could see in the classroom.” That teacher asked not to be identified, fearful of retaliation – think about that for just a moment.

Some, including Rhee, have suggested that the large number of erasures may simply reflect good test-taking strategies. It would be nice to believe that. Alas, a former Noyes teacher suggests there is no way the students would have erased wrong answers and self-corrected, saying “They didn’t check their work.”

What does it all mean? I’m not sure. There’s a lot to digest, but it doesn’t feel “right.” Maybe everything will be explained and no one is guilty of impropriety. I sure hope so. But just as I’m skeptical of baseball players whose statistics soared in the steroid era, the unbelievable positive results achieved under the leadership of Michelle Rhee strikes me as just that: unbelievable. The sad truth is this: just as there were undoubtedly some baseball players who didn’t cheat, there are undoubtedly teachers and administrators in D.C. who played by the rules and inspired their students to make wildly unexpected gains. When a system is sullied, however, everyone is tainted. That’s just part of the fallout of fear, coercion, and unrealistic expectations.