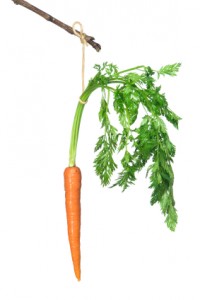 Alfie Kohn reviews some compelling research in a recent article, “Studies Support Rewards, Homework, and Traditional Teaching. Or Do They?” Kohn looks at three practices traditionally aligned with the carrot and stick approach to education: external rewards, homework, and direct instruction. Over the years, research appeared to routinely support these practices. Fortunately, Kohn has dug a little deeper – as usual – and unearthed studies that examined the effect of these “tried and true’ practices over time.

The results may surprise you, especially if you are one of the many who believe in the value of external control psychology and have been misled by the short-term research that has inundated the literature. Kohn cites six studies that suggest these external approaches were ineffective (if not detrimental) over time. The majority of the studies focused on schools but one looked at the impact of incentive pay for employees.

Here are a few of the highlights:

• Preschool children from low-income families in Illinois did considerably better on standardized tests when provided with a two-year program that featured direct instruction (DISTAR) and verbal reinforcement – at least for a while. Researchers found, however, that the gains diminished with each passing year and concluded, “This follow-up data lends little support for the introduction of formal reading instruction during the preschool years for children from low-income homes.” But wait. There’s more. Whereas about three quarters of kids in play-oriented or Montessori schools ended up graduating from high school, less than half of the direct instruction kids graduated. Takeaway: Introducing rigorous academic instruction to preschool children does not appear to lead to lasting positive results.

• Childhood obesity is a serious health concern in the United States, one so important that it has captured the attention of the First Lady. Most agree that offering rewards for weight loss only makes sense. A 2008 study showed that after four months, those who were given a monetary reward for losing weight had considerably more success than those who received no financial incentive. So rewards work, right? Not so fast. After seven months, “There was no statistically significant weight difference between those in either of the incentive conditions and those who received nothing.” Again, it seems that rewards work well short-term but are of dubious value when looked at over time. (Side “benefit:” I guess you can use the extra cash you earned to purchase your favorite unhealthy fast food.)

• Finally, a study from the world of work. When a group of welders had their contract renegotiated, a long-standing practice of providing incentive pay was removed. As you might expect, productivity declined. But only temporarily. Over time, productivity rates rose to equal or surpass what had been witnessed before. Let me be clear. I am in no way suggesting that workers should be paid less or are not deserving of fair compensation. Instead, this study provides concrete evidence that people work for much more than just pay, something lost on those who practice external control psychology.

Research is invaluable but it needs to be looked at carefully – and results examined over time. While countless studies seem to suggest that practices based on external control psychology are effective, a review of studies that examine the long-term results paint a very different picture. Here’s hoping that more of us will begin to switch our practices to those based on internal control psychology so we can take full advantage of the internal motivation that drives us all.