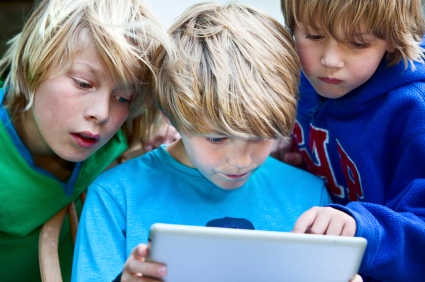 What’s on your curriculum? Because whatever it is…there’s an app for that.

iPads and their gajillion apps are the technological game-changer of our lifetime. Educationally, though, the iPad is at once overachieving and underutilized. In a device no more or less cumbersome than a spiral notebook, we hold the proverbial universe [of learning] in our hands.

Progressive schools from Portland to Boston have made the transition, replacing textbooks with iPads and vowing to never look back. The folks at Apple have taken note, and so should the rest of us. At this point, the question is not: “Should an iPad be added to each student’s school s Federalist upply list?” Rather, the question is: “What else could they ever possibly need?”

Exhibit A: Presidents vs. Aliens. It took just a few days for the kids I spent my summer vacation with to learn a dizzying array of presidential trivia after downloading this shoot-‘em-up game. This may look like, sound like, and entertain like a video game, but make no mistake: this is a U.S. history curriculum. Names of the U.S. Presidents? Please! Mere child’s play. How about their sequence in office? Who presided during WWII? How about, “Ask not what your country can do for you…”? Advanced levels of the game drop (and then explain) vocabulary like Whig, and impeachment. Players advance when they correctly identify photos, party affiliations, and famous quotations. In the approving words of one fourth-grade player, “It’s like Space Invaders, except you have to learn stuff.”

Twenty-first century kids interested in exploring the ancient art of cursive can practice on any number of penmanship apps. Those looking for help with basic math concepts need only visit their handheld App Store and search “fractions” to quickly become ⅜ dizzy with choices. Foreign language study is perhaps the perfect educational application of tablet technology. Plug in earbuds and Berlitz away. Music instruction, art history, anthropology lessons—iThinkItCan, iThinkItCan.

An iPad in each student’s hands replaces a classroom’s overhead projector, DVD player, pull-down maps, smartboard and myriad other old, bulky, and clumsy hardware. The attractive interactivity of tablet technology feels natural to kids raised on Xbox, YouTube and Facebook.

iPads have been enthusiastically adopted by those of us just looking to learn something new in our free time. And graduate schools have already embraced the iPad as a notebook-sized curriculum. We already recognize the iPad as an effective delivery system for these sorts of lessons—calligraphy or chess or 3-D anatomy tutorials. Now it’s time to take full advantage of the effectiveness and engagement the iPad can bring to the classroom.

5 Ways to Inspire Your Students to Write

5 Ways to Inspire Your Students to Write Read More