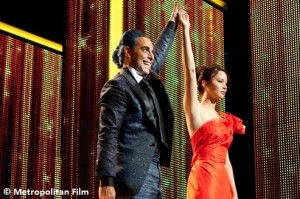 So…yeah. Since we’ve already weeded out the uninformed, the culturally clueless, and the willfully unaware, we can speak freely.

Are you caught up in the fever induced by Suzanne Collins’ trilogy? Were you part of the record-setting masses that pre-ordered tickets weeks in advance for the debut film’s opening weekend? Did you help to make The Hunger Games the most downloaded Kindle book ever? Don’t be shy. In fact, resist the impulse to dismiss your visit to Panem as a guilty pleasure. Instead, take heart that you’re dipping into a story line and an imaginary world that offers rich food for thought to chew over with your students, peers, classmates, and children.

The story of Katniss, Peeta, Gale, and the rest of the inhabitants of the fictional nation of Panem is as disturbing as it is page-turning, and paints a bleak picture of a future society tenuously held together by fear, distrust, and a Darwinian survivalist ethos. Herewith, talking points to bring the themes of a bestselling-fantasy-trilogy-turned-blockbuster-box-office-event into a relevant classroom reference:

• The games of the title refer to a state-sponsored, Olympics-like spectacle in which young people are selected via a perverse lottery to represent their home districts in fight-to-the-death battle. Only one “player” will survive, and there are no rules. Kids killing kids is what Collins is describing. It’s true that this violence is not born of free will but rather a product of government decree, but it’s youth violence nonetheless, broadcast as entertainment for their countrymen. In one reading, it’s a depiction of reality-TV culture carried out to its most extreme and horrifying conclusion. In another reading, though, we have to wonder if our culture’s attitude toward violence and warfare in some ways leads to us turning on one another.

• Civil disobedience and community organizing to subvert and (ultimately) overthrow an oppressive totalitarian regime? In this theme, Collins’ creation seems like it could be ripped from the lead stories of CNN. In Catching Fire and Mockingjay, the second and third entries, respectively, in the trilogy, the citizens of Panem attempt to overcome the isolation and deprivation imposed on them by their government to communicate, organize, and rise up against a malevolent regime. Syria, Egypt, Occupy Wall Street: pretty much just pick a headline and let’s go – Current Events hour. The Panemites contrive a revolt without benefit of Twitter, Facebook, or even a credible system of news dissemination. While today’s citizenry can organize and mobilize electronically to effect change, the society depicted in The Hunger Games has to rely on more coded means of communication and problem-solving to forge a solidarity movement.

• The psychology and morality of war feature prominently. In the Arena, where the young people representing their home districts will fight to the death, the mindset of warriors (some reluctant, others bred for heroism or martyrdom) is explored in minute detail. We see the battlefield through the eyes of our heroine, Katniss, but we also empathize with her antagonists as they fight for their lives against those who, in another, better world, might have been her friends.

• Finally, apocalyptic fiction has always been and always will be a thriving market. There’s something oddly compelling about a dystopian allegory. Why? Why do we like to read about Worst Case Scenarios of humanity’s future? And what do we learn about the human condition by exploring these disaster scenes?

The Hunger Games is much more than a pop culture phenomenon. Or rather, it’s a popular phenomenon because it resonates with characters, messages, and questions that speak to us and demand our consideration. Not a mere popcorn movie or fluff novel, it’s a vehicle that explores meaningful issues in a way that speaks to all of us. Another opportunity for parents, teachers, and kids to connect to one another.

Advocating For Children With Special Needs

6 Responses to Hunger Games: An Opportunity for Relevant Discussion With Kids