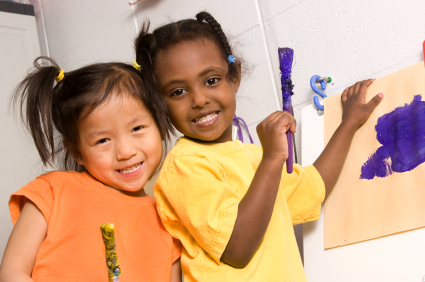 Picasso once said, “Every child is an artist. The problem is how to remain an artist once we grow up.” A quick glance around an African-American friend’s home recently showed me that he and many of his relatives have, delightfully, not grown up. At least, not in the way that concerned Picasso.

This was a home where important values were taught, including honesty, courage, and respect, and these same values could be seen on walls and pedestals around the house revealed in paint, pencil, fabric, wood, and stoneware, to name but a few of the media utilized in the work of so many creative family members, including the two children.

Art is an essential form of expression for humans. For students, the Three A’s—Academics, Arts, & Athletics—are all core to a well-rounded education. I was disheartened to read an article recently that reports a decline in arts education for minority students. The National Endowment for the Arts has recently issued a new analysis of federal data that suggests a disproportionate plummeting of any semblance of an arts education for Hispanic and African-American children. Only about one-quarter of these minority students receive any art experience in their lives whatsoever. Many school districts trace the beginning of the decline to 2002, when No Child Left Behind became law and schools had to shift increasing amounts of class time to test prep, stealing it from the visual and performing arts.

Because a majority of Hispanic and African-American children receive most, if not all, of their art education in schools rather than in expensive private lessons, art camps, or other extracurricular experiences, the loss of class time devoted to the arts has a particularly devastating effect on these students.

When will this country get the education reform it really needs? What kind of country will we have if entire racial and cultural segments of our society no longer receive the education they need to inspire artistic creativity and production throughout their lives? What would my friend’s home have looked like if he and his wife had not received the art education they did?

One Response to Encouraging the Artist in Every Child