Reality Check: Are Kids’ Sports Out of Control? 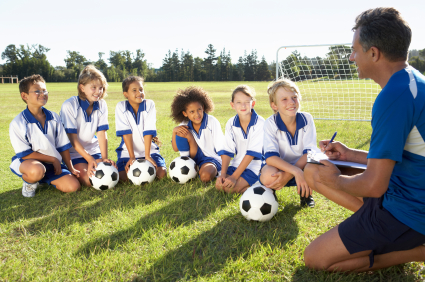 Disconnecting. Tuning out. Unwinding. Loosening up. Down time. Whatever you call it, there’s not much of it going on. Swing through any suburb on a weekday afternoon or (if you dare) on a weekend morning and you’ll most likely see the tennis-fencing-baseball-field hockey-ice hockey-soccer parade that marches through our highly caffeinated communities.

If you’re “Of A Certain Age,” I invite you to step outside your own involvement in this madness for a moment and compare it to your childhood. The resulting internal monologue may trigger the dreaded OFA (Old Fogy Alarm): “In my day, there were no ‘after school activities.’ We came home after school, played outside, and rode bikes to our friends’ houses. We didn’t have teams and coaches for every little game we played. Sports were seasonal. We didn’t play year-round softball. And we grew up knowing how to throw a ball, play chess, and hold down a job.” You know the drill: “Uphill, both ways, in the snow. Blah, blah, blah.” Looking at the evolution of kids’ schedules (and their parents’ complicity), begs the question: “How did we get here?”

In his 2009 book Until It Hurts, author and journalist Mark Hyman explores the culture of youth athleticism. Hyman suggests that the proliferation of kiddy specialists (a nine-year-old “full-time soccer goalie,” a sixth-grader clocking 20+ hours a week of tennis practice) is the direct result of adults’ hostile takeover of kids’ sports. Prompted in part by his own adolescent son’s burnout after too many years of intense focus on baseball, Hyman’s book spans genres—history, journalism, commentary and memoir—to paint a provocative picture of early twenty-first century American attitudes toward childhood in general, not just youth sports.

Blogger Hyman regularly highlights the highjacking of childhood by sports-obsessed parents. He also celebrates successful professional athletes who were allowed to toddle and fumble their way through a well-rounded youth before finding success in their chosen sport as young adults. The most disturbing stories—including Tommy John surgery on middle schoolers and what he calls an “epidemic” of torn ACLs among the middle school set—all adhere to a scary formula of gung ho parents over-involved in the “leisure” activities of their kids. Hyman’s work and the cautionary tales of his interview subjects are food for thought for every adult and adolescent involved in organized athletics.

Our cultural avoidance of unwinding seems to have seeped into kids’ after-school lives. Even so-called recreational activities – including but not limited to extracurricular athletics – have become so much more purposeful, so much more freighted, than they were when today’s parents were kids. Whatever the reasons—and make no mistake, most of those reasons are adult-generated—kids’ sports can no longer be appreciated only at face value, two sets of jerseys chasing down the same ball, each hoping to take it to the goal. Parents have piled expectations on the outcome of their kids’ training, lessons, clinics, and tournaments. A rational look at the numbers tells us that 99.99% of eleven-year-old Little Leaguers won’t even wind up playing college ball, let along make it to the majors, so it can’t be that every overbearing dad screaming on the sidelines is motivated by the dream of a big-league career. And for all but the elite few, a weekend tennis tournament isn’t going to make the difference between the a berth in the professional tour and a lifetime of social doubles, so the mom driving six weekly roundtrips to the indoor tennis center so Susie can compete year-round probably isn’t counting on the WTA circuit. What is moving us, as a culture, to assign such outsized significance to the games children play?

Of course we should encourage our kids’ interest in whatever hobby or sport that piques their interest. On the other, we need to remember that their full-time job is, well, simply growing. Growing, learning, studying, loitering, hanging out, messing up, trying again, developing, evolving, sleeping. Shooting for a scholarship is a laudable goal. But pushing kids to do more, better, faster, stronger, higher at any cost, and at the expense of the time they need to “just hang”? For what? Whether or not he makes it to the big leagues, or whether or not she makes the pro tour, will you be able to look back on their childhood involvement in sports and say – truthfully – that the journey was enjoyable, worthwhile, and honored a special time of life: childhood?

Advocating For Children With Special Needs

One Response to Reality Check: Are Kids’ Sports Out of Control?