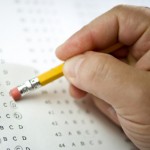 Standardized testing is the bane of some students’ existence as they go through school. Students start getting nervous in the weeks before, as their teachers are taking class time up with preparation worksheets and tips. Standardized tests have been in America for more than 50 years, according to TimeMagazine‘s “ABriefHistoryofStandardizedTesting.”

Where did testing start?

Testing for students started in China. “The earliest record of standardized testing comes from China, where hopefuls for government jobs had to fill out examinations testing their knowledge of Confucian philosophy and poetry,” ABriefHistoryofStandardizedTesting said.

Today, testing may be done for a different purpose–to aid in efficiency.

“But as the Industrial Revolution (and the progressive movement of the early 1800s that followed) took school-age kids out of the farms and factories and put them behind desks, standardized examinations emerged as an easy way to test large numbers of students quickly,” TIMEsaid. Large-scale testing is a quick way to test students over the same subject material.

How do schools use standardized tests?

Schools and school districts use tests for many different purposes.

“Schools use standardized tests to determine if children are ready for school, track them into instructional groups; diagnose for learning disability and other handicaps; and decide whether to promote, retain in grade, or graduate many students. Schools also use tests to guide and control curriculum content and teaching methods,” FairTest.orgsaid.

FairTest.orgalso said that districts use the scores to show school improvement and changes in study habits.

“In many districts, raising test scores has become the single most important indicator of school improvement. As a result, teachers and administrators feel enormous pressure to ensure that test scores go up. Schools narrow and change the curriculum to match the test. Teachers teach only what is covered on the test. Methods of teaching conform to the multiple-choice format of the tests. Teaching more and more resembles testing,” the websitesaid.

1. Get positive about taking tests

2. Clear the brain for learning and testing

3. Prepare for the test “strategically”

How Teachers Feel About Testing

There  are many aspects of testing that might have teachers worried.  From preparing students to understanding how to administer the test, there are many things an educator might wonder or worry about, such as classroom performance.

For information about teachers’ merit pay from tests, checkoutthisFunderstandingarticle.

“A student’s performance on a standardized test is influenced by many things: some obvious, some elusive, some over which educators have control, and others over which they do not,” an article on the education website TeacherCreated.com said.

TeacherCreated.com recommends a few ways to prepare students for the testing time of year. These include:

● “Begin talking about good habits at the beginning of the year. Talk about getting enough sleep, eating a good breakfast, and exercising before and after school. Consider sending home a letter encouraging parents to start these good routines with their children at home.

● Explain the power of positive thought to your students. Tell them to use their imaginations to visualize themselves doing well. Let them know that they have practiced all year and are ready for what is to come.

● Remember to let students stretch and walk around between tests. Try using “Simon Says” with younger students throughout the year to get them to breathe deeply, stretch, and relax so it won’t be a novel idea during test time,”

If you’re feeling stressed about testing your students, a few sites are out there to help any last-minute worries: