Race to the Top: An Invitation to the Bad Old Days 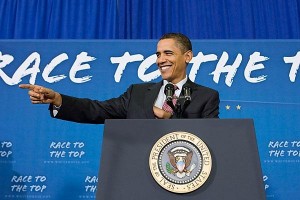 In the not-too-distant past, teachers worked in relative isolation, staying behind closed doors in their rooms, hoarding their best ideas, and reluctant to share with their colleagues. I’m not sure if it was fear that their innovative ideas would be ridiculed or stolen, but it was not unusual for teachers to work side by side and never divulge their best practices. Thankfully, enlightened staff development initiatives convinced teachers to share their expertise. Teachers became more collaborative and enhanced their pedagogical skills.

Welcome back to the bad old days, brought to you by the Race to The Top. As states compete for limited funds, collaboration across state lines – even though it enhances student learning – is now a risky proposition. No right-thinking teacher in Illinois is going to tell her friend from Ohio something that might compromise their grant application. And teachers from Maryland who have some interesting, innovative ideas would be wise not to say anything about that to their cousins from Colorado. Wouldn’t want to lose that money, would we.

Race to the Top, the brainchild of President Obama and Secretary of Education Duncan, encourages competition rather than collaboration. We live in an increasingly interdependent world where collaboration is more important than ever. And what are we offered? A competition. One guaranteed to produce losers. Rather than moving together as a unified nation to address what really ails education, we have been duped into thinking a competition for funding will somehow fix the problem. Of course most states have gone along. Especially in bleak economic times, it is understandable that most have decided to play the game – however foolish, unenlightened, and counterproductive the game is.

Race to the Top emphasizes standardized test results. Here’s something interesting that doesn’t get mentioned too often. More and more of our elite colleges (think Ivy League and their cohort) have dropped SAT requirements in recent years because they understand standardized tests are a very poor predictor of academic success in college. I met a woman last week who works for a well-respected college in the northeast. Her school has made the submission of SAT scores optional when students apply. Why? “We found there was absolutely no correlation between SAT scores and how well these students did once they were accepted,” she told me. Not low correlation. None. The best colleges know that test scores are a poor predictor of success.

Both the president and the secretary of education routinely talk about challenging the status quo. Addressing the centennial convention of the National Urban League on July 29, the president said, “We get comfortable with the status quo even when the status quo isn’t good,” he said. “When you try to shake things up, sometimes people aren’t happy.” As much as he paints himself as the innovative agent of change, when it comes to education the president has done little more than tweak a failed system, one that uncritically accepts that high test scores reflects excellence in education and the best way to encourage excellence is to reward what we like and punish what we don’t.

Maybe that’s what Pete Townsend had in mind when he wrote, “Meet the new boss. Same as the old boss.”

If you really want to challenge the status quo, move beyond the reward/punishment model, inspire kids, and create learning environments where teachers are genuinely encouraged to be creative and build active, engaging classrooms, I hope you’ll join me. I look forward to sharing ideas designed to help us educate our kids to be responsible, to become good decision-makers, and to build a strong internal locus of control.