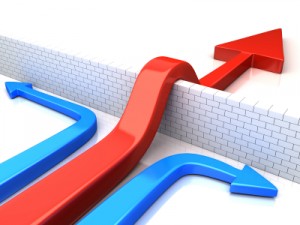 There seems to be some controversy raging over the use of so-called ‘presentation software’ such as Microsoft’s PowerPoint and others.  In 2003, National Public Radio estimated that there were approximately 10 million computers in primary and secondary schools equipped with Microsoft’s PowerPoint software. With the advent of competing software and open source products such as Open Office project from Sun Microsystems, that offer presentation software for free to anyone who wants to use it, the number of students with access to such tools has exploded.  Such tools are available to almost anyone who wants them, but are they good for our kids?

When electronic calculators replaced sliderules in the early 1970′s, they were originally an expensive novelty.  (Yes, I do still have my Pickett N3!)  My physics teacher refused to let us use electronic calculators, even if we could afford them, saying “When you can get a calculator for $5, I’ll require them; until then, use your sliderule.”  As calculators became cheaper and more common, teachers began to worry if they were good for students.  Didn’t calculators damage our ability to do math and understand numbers?  Wouldn’t kids allow the calculator to do their thinking for them – getting effectively dumber in the process?  Wouldn’t the use of a calculator let the less able student pass themselves off as smarter than they really were?  Has this story started to sound familiar yet?

Challenges of Technology in the Classroom

What of us in the classroom today?  The NPR story also featured those who decry the new technology, such as Dr. Edward Tuftee, Professor Emeritus in Computer Science and Statistics at Harvard, who summed his feelings about using the software in schools this way in an NPR interview in 2003: “Maybe teaching children to use Microsoft’s PowerPoint is better than teaching them how to smoke… [PowerPoint] helps the lowest 20% of presenters, helps the presenters, but not the audience. For the other 80%, it [PowerPoint] does serious intellectual harm.“  I knew dedicated, passionate teachers in the 1980′s (and ’90′s!) who felt the same about calculators.  While Time has not revealed whether these teachers were right or wrong about their students; it has shown that their feelings about the matter were irrelevant. Waves of technology wash over us all, willing or no.

So, what do we do about it?  How do we preserve the academic purpose of our lessons while making them relevant to our students?  How do we help kids bring scholarship and depth to their schoolwork while teaching them about new technology?  This isn’t as difficult as you may think, and it doesn’t require you to leap into the future so much as return to the fundamentals.  Here’s a few ideas for you to explore.

The Power is in the Question

Socrates taught us that there was often greater power in a clever question, than in a profound answer.  As teachers, we direct and shape the questions asked in class; and when it comes to the questions we accept for academic credit, we control the questioning process absolutely.  Bloom’s Taxonomy is still your friend!  Questions that require the student to apply what they know to solve a problem, and analyze data and evaluate a hypothesis will force students to think far beyond what background to put behind their results graph!  In this sort of classroom, presentation software occupies the same position as the calculator, graph paper and colored pencils – it helps students to work quickly and present results in a clear, legible manner.

Everyone who works for someone else knows the value of a clear and unambiguous example to follow – it’s priceless.  If we expect students to use technology such as PowerPoint, or similar software, we have to wade in and learn to produce an acceptable product ourselves.  But the ability isn’t enough, we need to provide an A-rated example available in the classroom and on the web for students to access.  Our example must make clear that the academic credit rests upon the depth and clarity of the content, and not on the flashiness of the medium.  Be prepared to discuss this in class and hammer it home every time you ask for a lab report or project.  Keep your expectations consistent!

Listen to the Kids

The technological revolution has reached such a pace that the youngest among us, who are the fastest and most adaptable learners, experience technology in a fundamentally different way than their parents and teachers.  Familiarity and proficiency with technology does not bring scholarship, but it does free the user to imagine what’s possible.  We teachers can pose the problem, the challenge is then to take a back seat and listen to how our students choose to solve it, and then communicate that knowledge to their peers.  There is great power in the open-ended assignment, and much for all of us to learn.

The new technology is obviously here to stay. As teachers, our challenge remains essentially unchanged; to bring forth thoughtful, scholarly work from our students. A radio reporter once summarized the controversy by asking: “…will teachers require students to think beyond the next bullet point?”  Our answer to shallow journalists and concerned parents is essentially the same: ‘Of course we will.’ Would it be possible for a teacher to educate very little and still have tons of neat, colorful (but essentially content-free) student produced work to show parents, administrators, or WASC evaluators? Of course. Teachers like this have always existed, and probably always will. There will always be some few who cannot distinguish between a pretty presentation and a thoughtful one, but most educators are far more perceptive than that.

The ‘Gee Whiz!’ factor will diminish and the business of education will continue apace irregardless of the next big wave of technological innovation rolling over us.  Remember that what we do in the classroom has very little to do with the tools our students use.  Good writing is about clear and effective communication, not pencil and paper.  Science is about understanding how the Universe works, not about graphing calculators and electronic balances.  I teach my students to think and solve problems; for the most part, they teach themselves the cutting edge technology of tomorrow.  In the 21st century classroom, we all teach and learn by example, just as we’ve always done from time immemorial.  My father would have put it more simply: “You can learn from anyone, and most of ‘em teach you what not to do.”  I wonder how I could make a good PowerPoint presentation out of that?  One of my students will surely know.

Please note that  ”Microsoft” and “PowerPoint” and “Open Office” are trademarks of their respective corporations.

(Bryan Suits Show – Sunday August 29th, KFI Radio, Los Angeles) talked about how several high ranking military officers are complaining about Powerpoint because it simulates leadership and military skill without the need to demonstrate it in the field. These folks think “bullet point thinking” is dangerous, not just shallow!