Posted on May 7 2014 by Ashley Sutphin Watkins

When filmmaker Paul Devlin was invited to arctic Sweden with his brother, astrophysicist Mark  Devlin, Ph.D., he didn’t realize he’d get a documentary out of the process.

Mark asked his brother to join him on the adventure of a lifetime—not only would they be traveling to Sweden, but Paul would be along for the ride as a team of talented scientists attempted to launch a sophisticated telescope above the Earth’s atmosphere.

The goal? Only to uncover the most powerful secrets of the universe.

What was initially intended as a one-week trip with his brother turned into an ambitious adventure, as Paul traveled with the team of scientists for six weeks in Sweden, and then for months as they went around the globe to discover new galaxies.

Paul, who earned accolades for documentary films such as Slam Nation, quickly saw the opportunity to tell the story of this team of scientists. The film later became known as Blast!

“We weren’t actually thinking about making a movie,” explained Paul. “While I was there I discovered what a fascinating project this was and what interesting lives the scientists had.”

Blast! is different from other films showing scientists at work, and Paul credits this to the fact that it’s all about the process.

The initial six weeks in Sweden turned out to be a complete failure, and Paul wasn’t sure how that would play out in terms of a documentary.

“Generally science programming focuses on results,” said Paul “What we were interested in with this project was what do the scientists really go through.”

After returning from Sweden Paul, consulted his father, also a scientist.

His father pointed out that failure is an important component of the scientific process, and the initial phase to launch the telescope was just the beginning.

It was at that point Paul determined he had an epic documentary in the making. He then decided to travel with the team to Antarctica and three other continents.

“I was trying to humanize the scientists and the process, and with that in mind, hopefully make science a bit more accessible to the general public,” emphasizes Paul. “So it’s not just about complicated results. But more about what the people go through as they’re pursuing these lofty goals.”

A New Perspective for Students

Teachers in the U.S. are constantly struggling to pique scientific interest, but it’s difficult to take these abstract concepts and make them applicable to the daily lives of students.

The value of the film lies in its ability to get students excited as they follow this team of scientists into an unknown adventure spanning the globe. According to Paul, it’s this sense of adventure that initially draws students into the film, and once they’re hooked they can begin to gain a deeper understanding of the scientific concepts at play, such as what the term “light year” really means. 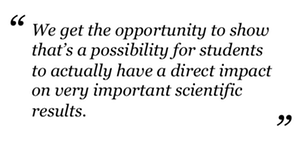 “The feedback I’ve gotten from teachers and educators is that film has the drama and the excitement and the suspense that draws students into the process,” says Paul. “A movie always has the glamour and the interest that will get people to watch. Once they watch and once they’re drawn in by those elements, then you can start teaching them about the science and about the process. That was very important to us. We wanted to draw people in first, so we have this huge cliffhanger at the beginning of the movie. And then we get people interested in the characters and I think gradually we bring people into the science and scientific concepts.”

Not only does Blast! provide a glimpse into the fascinating world of science, and the mysteries of the universe, but it also lets students explore the opportunities of their own futures.

“Who would know you could build telescopes and launch them?” he asks. “Did they even realize that was a career path? And it opens up other possibilities. What else does science have to offer? There’s so many different routes you can go.”

Alongside Mark Devlin and his team of researchers, Blast! also places a lot of emphasis on the importance of the graduate students working on the project.

“On a much larger project the graduate students play a minor role. In a small project like BLAST they were actually building the telescope and in charge and responsible for very essential components of the experiment,” says Paul. “We get the opportunity to show that’s a possibility for students to actually have a direct impact on very important scientific results. There are young people in the movie who are very relatable to students.”

As Paul Devlin gained tremendous positive feedback for Blast!, and began to see the doors it opened up in terms of education, he decided to create a version of the film specifically for use in the classroom.

Along with several edited versions, teachers can also take advantage of a comprehensive guide with terminology from the film, and suggestions for curriculum to accompany the concepts outlined in the scientific process of Blast!

As a documentary filmmaker, Paul says his goal is always to influence people’s lives.

“I would love if 10 years from now some great scientist came up to me and said I became a scientist because of your film Blast.”

Low Tech: When Movies Are Remade By Kids

Low Tech: When Movies Are Remade By Kids Read More