Posted on November 6 2012 by Geoffrey Caine 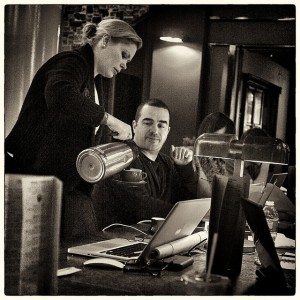 I live in a small mountain village in California. My office is there, but my main office is not the one on which I pay property tax. It’s a table at our favorite restaurant and coffee shop on the edge of the village. Café Aroma. My laptop is tied to me like an umbilical cord, and occasionally I even manage to do some writing (as I am now).
But half the time is spent talking – to Hubert, the Belgium born former professor of math who owns the place; to Rita, a wonderful therapist who has spent countless hours in the same coffee shop working on a new approach to couples therapy; to Renate, my wife and partner whose table is even more well established than mine.

We love the place. We connect with the people. We enjoy being part of the community. And we share with them what has been called the “contact urge” or the “longing to belong.” It’s just good to be with kindred spirits, even when we (sometimes) violently disagree. And we do!

I read an article once that suggested that the people who recover best from hard times are the people who have other people in their lives. They are the best antidote to the downs and the single most reliable “up.” Which is why working in a place that is basically friendly, even if it’s challenging, is the best place to be for kids as well as adults.

It’s also the best place in which to learn. A guy called Etienne Wenger spent some time years ago watching insurance clerks pore over the claim forms that came flooding into the company. He was struck by how they dealt with confusion. He talks about one person who was new to the job asking someone else what on earth to do with the answer on one particular part of the form (if you think those forms are confusing, so do the people who work with them!). The experienced clerk said something like, “Oh. When that happens we just do this” (I don’t know what the this and that were). They taught each other. And that research became the foundation for what are now called Communities of Practice. Another take on working together in schools are Professional Learning Communities, which seem to have become the tool of choice for solving a whole lot of problems.

But a word of caution is in order. Strategies for working together can make things worse as well as make them better! It’s a good idea to get them right. For instance, one high school was caught like a deer in the media headlights a few years ago – it faced pressure to improve test scores and all the other issues that readers know about. So the administrator decided to set up Professional Learning Communities. Except that he shoved them down the throat of most of the staff. There was an in-group and an out-group. Lots of people did not feel heard. And the result? It was something that researchers called “threat rigidity.” Many teachers became even more isolated, practices became even more unchanging, and things did not work very well. So much so that one group of teachers got together to force the administrator out.

So I’m really pleased that we have Café Aroma. And my wish for educators everywhere is that they find their own spirit of Café Aroma, especially in the places where they work.

Geoffrey is the author of an upcoming series on ‘Listening’. If you want to be part of the early reviewers for that series please contact us.

About the author - Geoffrey Caine

Geoffrey Caine's core theme is that people were naturally learning from life long before schools, corporations and information technology were invented. He is charged to make use of and develop what we all do naturally. Geoffrey has just released his new ebook, The Key To Powerful Learning: Slow Down To Speed Up. He is also coauthor of nine books as well as other pieces that integrate brain research, small group processes, systems thinking, natural learning, and education. He is a former tenured member of the faculty of law, University of New South Wales, Australia and is now currently the Executive Director of Caine Learning.

Being a Versatile Listener

Being a Versatile Listener Read More

Brain Functions: How They Work