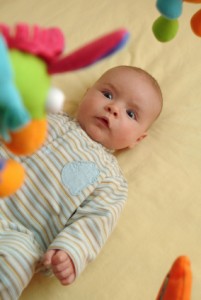 There is a common belief that internal motivation emerges as children mature. Most people have no trouble accepting that adolescents are internally motivated but cling to the notion that younger children are motivated externally. The truth is that we are motivated from the inside out from the moment we are born.

If you are skeptical, just observe an infant for a while and you’ll see internal motivation in action. It may have been simple luck that led the infant to hit that mobile in his crib, but once he hears the sound it makes or sees it move, he wants to make it happen again and again. He will amuse himself for hours, attempting to hit the mobile, recreating the sights and sounds he finds so amusing. There are no “Student of the Month” awards given if he succeeds. There are no promises of an increased allowance. What drives the infant is an innate desire to demonstrate competence, to be able to do something he couldn’t do before. That’s why when a youngster learns a new skill, they want to repeat it again and again (and again, ad nauseum). It doesn’t matter if anyone watches and “reinforces” the behavior. Demonstrating competence is its own reward. We feel tremendous pleasure when we master something new.

Still not sure if very young children are internally motivated? Watch a child of about 6 months work feverishly to reach a just-out-of-reach toy. You may never again witness such focused motivation. Even when an adult moves the toy just a little further away, the child continues her quest, gleefully accepting the challenge. Why? Because she is internally driven by a biological imperative to achieve and demonstrate competence.

Internal motivation isn’t something we “develop” or “mature into.” It is wired into us from birth. Most importantly, when any of us – young or old – achieve what it is we want, we feel a sense of satisfaction that cannot be matched by any external reward. Paradoxically, providing an external reward for achieving interferes with the brain’s natural reward system. More on that in a subsequent post.

One Response to Internal Motivation: Present From Birth