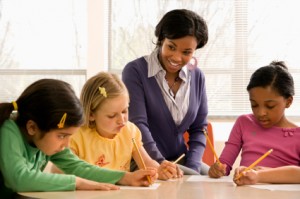 According to Pre-K Now, the concept of early childhood education started with a European mother in the early 1800’s that educated children outside of their homes. The idea came to America during the Industrial Revolution with “infant schools” set up in churches, factories, and private homes to care for the young while parents were working. The state of Wisconsin created constitutional amendments to include committees dedicated to free education of children aged four to twenty in 1848 and then later, in 1873, started the first four year old kindergarten program.

As time progressed, other states began to follow Wisconsin’s lead in the area of early childhood education with preschools, day care centers, and nursery programs starting across the country.  In 1926, the National Association for the Education of Young Children (NAEYC) was established dedicated to improving the well-being of all young children and focusing on the quality of education and developmental services offered to children from birth to the age of eight.

Head Start, founded in 1965 as a program through the United States Department of Health and Human Services, was originally founded to ready low-income children over the summer months for upcoming kindergarten. Over the years, Head Start has become a respected preschool aged program found in many communities working with children of all backgrounds and abilities.

The concept of educating young children within the family has been happening for many, many years, but the evolution of early childhood education within an outside setting has many different theories and facets. The studies conducted by Jean Piaget along with the work he did with children, paved the way for educators to create different styles of teaching to use within programs. Many of these theories of teaching are used in preschools around the country. They include:

Early childhood education is an important step in educating children and offering stimulating opportunities for exploring and learning.

Our current education system dates back to the Industrial Revolution. At the time, our country… Read More