Testosterone, Aggression, and the Power to Change 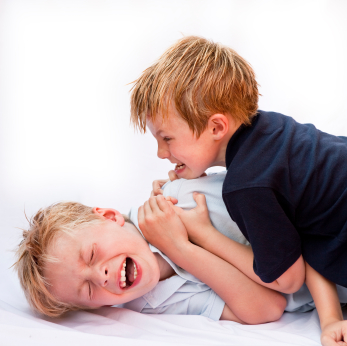 I came upon a study recently that caught my eye for three separate – but related – reasons: first, the study was fascinating in and of itself; second, it provided even more evidence that the concept of “total behavior” proposed by William Glasser is valid; and third, it offers potential avenues of intervention when we are faced with unwanted aggressive behavior in school like bullying.First, consider the study itself. On September 12, Scientific American published an article entitled “Fatherhood Lowers Testosterone, Keeps Dads at Home.” The research began following 465 men in the Philipines in 1983. (That certainly qualifies as a “longitudinal study.”) When the researchers tested the subjects in 2009 – twenty-six years later – they found that testosterone levels had decreased about 12-15% for men who remained single. The testosterone levels of men who had children between one month and a year old had declined about 30%. Furthermore, “Hormone levels in fathers of newborns (1 month and younger) dropped four to five times lower than levels in single men levels and twice as much as fathers of older children.” Take a moment and consider these findings. Testosterone is a hormone associated with aggression. Most people believe that we are “wired” a certain way and there’s nothing we can do to change basic hormonal levels. Clearly, that’s not the case. Apparently, becoming a father and caring for our young has a direct and significant impact on our physiology. When a woman is pregnant, there are enormous and direct physiological changes that occur within the body. Apparently men – who have no direct physiological changes during the pregnancy – undergo significant changes in hormonal level simply through the act of parenting. Furthermore, those men who were more involved in the care of their child showed an even greater decrease in their testosterone levels. Just looked at in isolation, the results of this study are fascinating.

Now let’s look at these findings as they relate to the concept of “total behavior.” In a nutshell, Dr. William Glasser believes that all behavior has four components (acting, thinking, feelings, and physiology). When we change any one component of behavior, the other components change as well. Some months ago, I wrote an article with provided scientific evidence supporting Glasser’s contention. The testosterone study conducted in the Philipines offers even more evidence. As men engage in the act of parenting (acting), their physiology changes in ways that are measurable and significant. Despite long-held beliefs that we have no control over our feelings and physiology (“I was born this way”… “He has a biological predisposition to behave this way”…. “That’s just her personality. There’s nothing she can do about it.”….etc) here is compelling evidence that what we choose to do directly impacts our physiology.

This has important practical implications, specifically as it relates to education and aggressive behavior. Too often, we hear that some students are “predisposed” towards aggressive behavior. It’s their “temperament.” There’s little we can do to change it. But given what we know about total behavior (supported by research), we can help students alter their physiology by changing their actions. We don’t need to resort to drug therapy – direct intervention on the physiological level. And we can abandon harsh, ineffective, punitive approaches – hoping to coerce bullies into acceptable behavior. Instead, let’s help aggressive students see the value in acting differently. The loving, involved father who values raising his child experiences a marked change in his physiology. The same scenario can unfold with aggressive, violent students. When they find something positive to connect to, something they care about that gives them a sense of purpose they didn’t previously have, they will change how they choose to act. And that decision – to act differently – will have a profound impact on their “predisposition” to behave aggressively.

Almost a century ago, Sigmund Freud said, “Anatomy is destiny.” Fortunately, we now know that Freud, despite his brilliance, was wrong. Our anatomy does not make us act in a pre-determined way. We have a choice and the power of choice is so profound that actions literally alter physiology. Our capacity to be self-governing offers great hope to those who have been born with a “predisposition” towards aggressive action. With our support, they can change. And we will all be better off when they do.