Race To The Top: As “Top Down” As It Gets 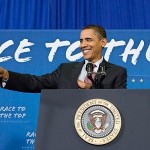 Let me say at the outset that I voted for Barak Obama. I anticipate he’ll get my vote again. Still, as a lifelong educator I find myself dismayed and confused about where he stands on educational issues. In his May 21 radio address, the president talked about the Booker T. Washington High School in Memphis where he delivered the commencement address last week. “We need to reward the reforms that are driven not by Washington, but by principals and teachers and parents. That’s how we’ll make progress in education — not from the top down, but from the bottom up,” the president said. Sounds reasonable to let principals, teachers, and parents drive reform efforts. (I would have added students, but then again I still believe in principles connected to “no taxation without representation.”)

President Obama went on to tout his Race to the Top initiative, one that requires states to compete with one another to secure the funding that makes reforms possible. What was left unsaid was the fact that states must promise to follow what Obama and Secretary of Education Arne Duncan want in order to get funded. If states don’t commit to doing what the feds want, they are left without funding. Sounds remarkably “top down.”

So what’s the deal, Mr. President? Do you want local principals, teachers, and parents to develop effective educational reforms or do you want to provide funding only to those who promise to advance your agenda?

How long do you plan to play both sides? (I guess as long as there are enough of us who are disappointed but likely to vote for you again, there’s little hope we’ll witness the change we hoped for and were promised.)