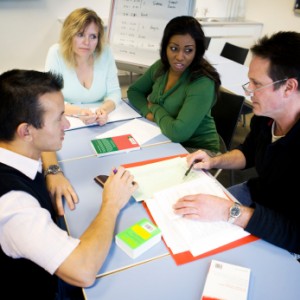 It was one of those moments that every school principal knows about, understands, and dreads. You’re sitting with a room full of colleagues, miles away from your school, when someone enters the room and hands a note to a person at the back of the room, asking that it be passed to the “right” person. “Please. Let it not be me,” you’re thinking. Receiving a note in the middle of a conference can only be bad.

Much to her dismay, Barbara Hay, Principal of  Koraunui School in Stokes Valley, New Zealand, was the “lucky” recipient of the note that read simply, “Call school. NOW!” She excused herself from the room, called her school, and was informed that “World War Three has erupted in the school playground.”

What Barbara found when she got back to school is still fresh in her mind almost eight years later. “Large groups of kids – some with softball bats – had been surging round the playground, looking for fights against other large groups of kids. The staff had been able to restore order without any child being seriously hurt, thank goodness, but the tension in the air was palpable. As a staff we knew at that moment that we had to do something different.”

Fast-forward eight years. Walk around Koraunui School today and what you see is vastly different. Many of the teachers who were there when “World War Three” broke out are still there today. The student population, multicultural, low to middling socio-economic environment, is pretty much the same as it was then. But this is a different place. Fights, chaos in some classrooms, and discord have been replaced by a culture of kindness, community, and resolving differences peacefully.

This is no Utopian fantasy. “We still have the occasional tussle in the playground,” says Barbara, “but it’s so different today. Where before the kids were quick to fight, today when two kids are close to blows there’s a good chance that many of their mates will inform a teacher because we have decided that we simply don’t like fighting here. We accept that we have differences. We just want to resolve things peacefully and respectfully.”

A sign on the wall in the school playground helps keeps children focused, reminding them of alternatives to violence. They are asked to “try at least two of these strategies” before talking to an adult. At Koraunui, kids are expected to resolve their differences independently. “We understand that conflict is part of the human experience,” Barbara explains. “But we don’t want adults always intervening. We prefer the kids work things out themselves. We give them the necessary tools and encouragement to be problem-solvers. More often than not, they are quite capable of sorting things out without us adults getting in the thick of it, taking sides, telling everybody what to do. On those occasions when kids try to work things out and are unable to resolve things successfully, we’re quite happy to lend a hand. But our goal is to help them solve their own problems. While we have the odd dust-up, the kids do a remarkably good job now that they have the tools to monitor their own behaviors successfully.”

Walk around Koraunui, and you’ll see kids actively engaged, involved, and clearly enjoying themselves. But this isn’t a place where kids do whatever they want without adult guidance and structure. Sure, kids are having fun. But make no mistake. It’s fun with a purpose. An educational purpose.

“After my ‘World War Three’ moment,” Barbara says, “we decided we needed to go in another direction. We had tried the traditional way and this is what we had: kids with softball bats, ready to seriously injure each other. Kids more consumed by conflict than ready to learn. I can admit it now, quite comfortably. We were desperate. It was at that moment that we discovered choice theory. Quite fortunately, one of our staff members had been introduced to this approach and had come away impressed. Because she is a no-nonsense professional who wasn’t likely to fall for something that wasn’t worth looking at, we took notice when we saw positive change occurring within her classroom. We brought in an amazing Glasser Institute trainer, Maggie Bolton, to help us learn a new way of thinking and doing. What was most illuminating was that this new way was not about changing the children, but about us as a staff changing ourselves – from being in charge, to leading. To effect change in the children, we had to change. No mean feat to change disconnecting habits learned over a lifetime of external control experiences.”

Eight years later, Barbara Hay, the staff, students, and families that make up the Koraunui community are still on the journey. “We’re not done yet. Not by a long stretch,” says Barbara. “But things have changed enormously. I no longer go to principal meetings and fear I’ll be the one called out with a ‘call school now’ note.”

“Yes, it’s opening day, but the school runs just fine without me,” Barbara answered. “Sometimes I wonder if they even know I’m there or not.” Barbara introduced me at my presentation, 20 minutes away from her school, confident that her staff and students would be just fine without her micro-managing every move. Of course, because Koraunui is a caring, connected community, Barbara did slip out to visit her school later that morning. “It is opening day, after all,” she explained. “I really do enjoy seeing the kids on their first day back. They are so excited.”

“When we realized that we had to make changes, it wasn’t just about negative behaviors. These were simply an indication of lack of engagement in quality learning and a lack of understanding how to do things differently. We are working to eliminate punishment as a tool of control in the school. As we get better at this, children become more truthful about their own actions. Instead of punishment, ideas are shared and plans developed to avoid repeating the negative behavior, which is the ultimate goal. We really notice how far we have come when children arrive from another school. It takes them about six weeks to ‘get it’! A child, who was with us for just a year, stated to his teacher on departure that he was going back to his old school to teach them how not to be bullies. Music to our ears!”

“What about academics?” you ask. Is this one of those schools where kids are “happy,” but very little learning takes place? It’s a fair question and one I asked Barbara. After hearing her talk about how receiving schools described her former students as “respectful,” “responsible,” and “kind,” I asked her specifically if they were described as “academically competent.” As I told Barbara, I wanted to know if Koraunui was succeeding academically with kids, as well as socially and emotionally.

“Many children arrive at Koraunui well below where we want and expect them to be,” says Barbara. “A child who begins with us behind age expectation is not unusual. I’d say it takes us roughly three years to help most kids reach a level where they are performing academically at or above where they would be expected to achieve. By working hard to ensure our children’s basic needs are being met, that they are not left only in survival mode, academic achievement happens. A good dollop of quality teaching also helps, so the environment of constantly searching for quality in our work is not just for children. All staff …teachers, teacher aides, administration, and caretaking staff work hard to improve personal performance.

“Our success needs to be judged on the rate of progress children are making, not just meeting standardized benchmarks. Many of our children have a much longer road to travel. Now, instead of crawling, they are learning how to run.”

So it’s not just a matter of Koraunui kids being “nice” kids who are academically unprepared. As they move forward, they are perceived as kind, socially competent, responsible, AND academically ready to accept the educational challenges ahead. As Barbara says, “If we can do it at Koraunui, any other school can do it as well. You just need to make a decision, a commitment, and learn a new way to help kids grow and learn. We’re not here to control them. We’re here to assist them in their development as learners, and – more importantly – as people who are part of a community. For us, choice theory has been an indispensable part of our transformation.”

3 Ways to Bring Problem Based Learning to Your Classroom

Have We Lost the Real Purpose of Teacher Evaluation?

Have We Lost the Real Purpose of Teacher Evaluation? Read More

2 Responses to Koraunui School: A New Zealand School On the Journey to Quality