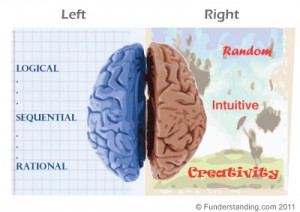 The notion that some of us are left-brained (logical, analytical) and some are right-brained (intuitive, creative) is nothing new. The eyes of the masses fixed on this idea starting in the 1860s when Dr. Paul Broca (and a few years later, Dr. Carl Wernicke discovered areas in the left hemisphere of the brain that were used for language. Interest in the brain’s duality can be seen in literature from the era, such as Robert Louis Stevenson’s 1886 Strange Case of Dr. Jekyll and Mr. Hyde. This article explores left brain vs. right brain function in learning theories in-depth and here is where you will find our general overview on right brain left brain.

Beginning in the 1960s, the study of differences in the hemispheres became extremely popular. Dr. Roger Sperry studied split-brain patients (whose two hemispheres could not communicate with each other due to a severed corpus callosum) and won a Nobel Prize “for his discoveries concerning the functional specialization of the cerebral hemispheres.” Google “right brain/left brain” today, and you’ll get over 34 million results. Not bad for something Psychology Today called its “Fad of the Year” in 1977.

Functioning of Left and Right Brain

While research seems to confirm that there are areas in the brain for language and some for spatial functions, the brain is a series of networks. The assumption that each individual is either right-brained or left-brained is an exaggeration, according to Dr. Michael Corballis, a professor of psychology at University of Auckland in Auckland, New Zealand. “These centers have to do with how the normal brain processes the world, and not with how people differ from each other,” explains Corballis. “To say that the two hemispheres have somewhat different functions is not a myth. But it is wrong to say that one or the other side is universally dominant. Dominance is task-related, not person-related. If we’re talking or reading, the left brain is dominant, but if we are navigating the right brain is dominant. I think there is a strong desire to categorize people into two groups (good/bad, strong/weak, fat/thin); it’s a kind of easy simplification,” explains Corballis.

Corballis points out that creativity is often considered a right-brain characteristic, and yet language, which is very creative, takes place in the left brain for most people, even most left-handed folks, whose hand skills are controlled by the right brain and thus have been perceived as more right-brain dominant. “People do, of course, vary in analytic powers and in emotionality,” he says. “This doesn’t mean they fall into distinct groups. Both measures are continuous rather than discrete. For example, you can be both analytic AND emotional!”

While you may not want to spend your hard-earned money on tests that claim to help you discover if you’re left or right-brained (and how to use it to your advantage in business in five easy steps!), quizzes taken for fun are relatively harmless and may give insights into your personality. Corballis states, “The tests are probably telling you something about the way you think, or respond to questions, but this probably has little to do with which side of the brain is dominant. It can be useful, of course, to know that you have certain characteristics — that’s what testing is all about, but trying to relate it to brain dominance gives a false air of scientific respectability.”

Perhaps understanding more about the personalities of your students and/or your children can help you develop fun new ways for them to learn , realizing that each of us has both creative and analytical skills. As an educator, it could also be quite beneficial for you to understand your own right brain vs. left brain tendencies.

About the author - Emily Vietti

6 Responses to Left Brain Vs. Right Brain Function in Learning