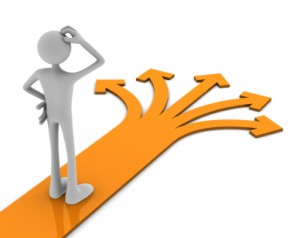 You are lost while driving and need to make a couple of quick-thinking decisions. Should you continue straight or pull over? Ask for directions or figure it out on your own? Your brain is running through all these options trying to determine what the best solution is. So, what part of the brain is in charge of that final decision?

The brain is split into two hemispheres – the right and the left, both having specific functions. The left-brain is responsible for rational thought processing, logical sequencing, and analytical considerations. The right brain helps out with creative thought, intuition, and looking at the big picture.  Right brain left-brain functions work together to create a complete human brain, which plays a large role in the decision making process.

It’s often thought that those that use their right hands are left brain dominant, and then the reverse for left-handed individuals. Even when one side of the brain may be considered in charge, it does not mean that both sides are not part of the decision making process.  It is not necessarily a right brain or left brain issue. One side may have stronger pull over the other, but there are other influences involved – and parts of the brain. Decision making is a process that includes many elements, even though most individuals make decisions within seconds.

Understanding the way our brains come to solid decisions has been researched through various interesting and insightful experiments. Right and left-brain differences do play a role in how a decision is made within the brain, but so do other parts of the brain system. Through experiments conducted on rats, it was discovered that when faced with a challenge, rats used their hippocampus to replay past experiences to help make decisions. A cognitive map was created to assist in determining correct and incorrect decision making, with the research potentially helping aide in fighting ailments that affect decision making in humans such as Alzheimer’s.

With the hippocampus lying behind the eyes, it has both a left and a right side. Being part of the limbic system, the hippocampus works with the brain in developing memory. Memory is a large part of how the brain makes decisions.

Human behavior also effects the final decision making process, with small influences such as mood, circumstances, and conditions playing a part. The brain sometimes challenges itself, causing arguments amongst its regions when coming to a final decision. Through a series of clever experiments conducted by Princeton University psychologists, participants were challenged with various frustrations when asked to make decisions, such as questionable information, hard to decipher directions, and other influences. Their findings showed that often participants used their emotional, gut-reaction, other than relying on their controlled, rational decision making skills.

How the Right and Left Brain Help

As previously stated, the right and left-brain functions are different but work together to create a whole being – including helping to make those tough decisions. Right and left brain differences are what make our brains unique and each of the right and left brain characteristics play a big role in helping to come to a decision. Most of us find one side of the brain more dominant, leading into understanding which side of the brain may take charge when coming to decisions. With a majority of the population being left-brain dominant allowing their rational side to take charge, most make realistic and rational decisions. But, sometimes using the intuitive right brain may be of assistance.

So, when faced with determining which way you need to turn the next time you are lost, you can go with your gut reaction, or take a moment to work out your decision making process. There are simple tests you can take to figure out it you are left brain or right brain dominant. If you determine that you are more of a left-brain thinker, you may find yourself comfortable with the decision to pull over and consult the map. Those right brainers out there may continue driving and feel comfortable seeing where the road leads.

No matter how your brain comes to your final decision, take the time to feel good about how you got there. Your brain is a wonderful thing and when you feel positive that you come to making a final conclusion, it benefits making future decisions.

One Response to Decision Making and Right Brain Left Brain