TMSIDK: Why do beer steins have a cap?

That was the question my colleague Mickael asked me while sitting in my dining room looking at my collection of beer glasses and mugs. He had noticed a big mug which I had brought back from Andechs, Germany. 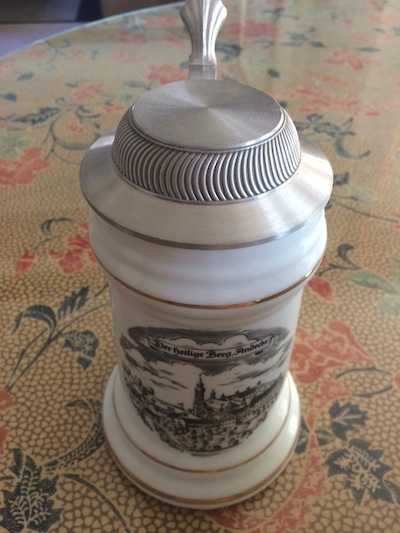 As I started to answer, I realized I had no idea so I looked it up on the web.

Any takers?  My guess was that it kept beer from spilling out, possibly while everyone was swaying and singing.

This is an example of the age old saying that “necessity is the mother of invention.”

As it turns out, the reason why tops were added to beer steins was because in the late 1400s, little flies invaded Europe. In the 1500s, laws were passed that required food and beverage containers be covered for sanitary reasons.

What’s interesting is that these beer tops are related to Spanish Tapas. How so?  What does a Spanish appetizer have to do with a beer top?

Although the lids were meant to be sanitary, people believed that lids preserved flavor.  The first lids were pieces of bread that covered your glass. In Spain, they are called Tapas.

One last little nugget for you. Earlier, I mentioned Andechs, Germany. The brewery is famous not only for great beer but that it is brewed by Benedictine monks. There are only a few handful of these monastery breweries in the world.

3 TED Talks Every Parent Should Watch

Getting a Great Book Cover Inexpensively and Quickly Read More