Posted on November 28 2012 by Funderstanding

Your book needs a great cover. In truth, I should just end this blog post right now. Nothing else needs to be said since it’s so obvious. Yet, it’s one of the major sins of most authors and publishers.

We get it. You’ve spent a lot of time on your book. It’s good. It’s compelling. You’ve had it edited and proofed multiple times. It’s as good as it’s going to ever be. When people find out about it, either they will like the subject/story and they’ll buy it or they won’t. Nothing will change that. And covers cost a lot of money.

We’ve actually gotten quotes as high as $1,800 from a big publisher person for a cover. And if that’s not rough enough, they also expect that it could take 6-7 weeks to finalize. That’s a lot of money to shell out with no guarantee of return. And in our case, everything else was done so waiting another 6-7 weeks is hard to fathom.

In this day and age, you probably know someone with some graphic skills and can have them create something for free or cheaply. And you probably would like it.

Please don’t make that mistake. And don’t let your publisher tell you it’s ok either. An average looking title will not garner any attention. Worse, a bad looking cover will hurt you. If the cover is bad, the customer will assume it’s a reflection on the book itself.

A Case Study – Getting a good-looking cover inexpensively and quickly

The Doomed Colony of Mars

The author, Daniel Barth had a cover created by his publisher, Xlibris, for Maurice and the Doomed Colony of Mars. He found a compelling image of Mars from the NASA website and sent it to the publisher. The publisher put the title and his name on it. The cover is pictured here. 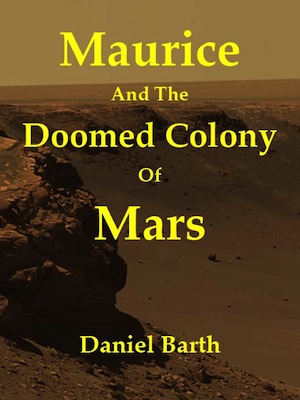 Recently, we were tasked to create the digital version of the book. After completing the conversion to digital format and a day before we were to upload the book to Amazon, we traded two emails talking about how the cover was doing a real disservice to the book. It took about 10 minutes to decide that we should find a way to have a much better cover created.

After contacting several artists, we opted to go with an interesting crowdsourced service called 99designs. 99designs is basically a contest where you post your requirements and your price and designers will submit designs to you for feedback and hopes of winning the contest.

Below is exactly what we wrote in our description. We also posted the first chapter of our book. Our designer would earn $299 for their work.

We are about to deliver an ebook version of The Doomed Colony of Mars, book 2 in the Maurice Series. The paperback version has existed for a few years but we feel that the cover is very subpar. You can see it at:

Description of the book:

The Doomed Colony of Mars continues the adventures of Maurice Haberman, a young boy growing up in a frontier mining colony which began in Maurice on the Moon. In Doomed Colony of Mars, Maurice and his mother are shanghaied into going to Mars to try and save the Eureka Colony, which is on the verge of collapse.

On the way to Mars, Maurice meets Shannon Kappel, the daughter of an Irish flight engineer who has also been recruited in the rescue effort. Sparks fly as the cultured girl from Ireland meets our frontier boy from the Moon! On Mars, Maurice becomes convinced that the problems plaguing the colony are not just accidents; he begins to see spies and saboteurs around every corner. Could someone living in this remote colony hundreds of millions of miles from Earth really be trying to destroy the environment upon which all their lives depend?

Mars is a challenging environment for Shannon, who has never been to space before; and for Maurice, who has never spent much time on a planet with real weather. Can they survive Martian storms and dust devils as they explore craters, ancient lake beds, and the fabulous Mariner’s Valley on Mars?

Maurice continues to look for evidence of sabotage, but there doesn’t seem to be any motive for one of the colonists to destroy their own home, and no one is quick to believe a notorious prospector and buggy pirate from the Moon! The tension mounts as Maurice and Shannon continue to explore; Maurice could be right about the saboteur – dead right!

Subtitle: Book 2 in the Maurice Series

Format: This is for an ebook cover only. It needs to look great in all the online bookstores (Amazon, Apple, B&N, Kobo, etc), in all sizes. We will be looking especially hard at thumbnail sizes.

Audience: Although this book’s science related text is geared towards 5th-9th graders, we want the cover to entice up to an 18 year old. This is NOT a children’s book.

We want to depict a sense of adventure, mischief, science fiction, realistic science, spies, sabotage, mars, and fantasy. The cover should NOT reflect that it’s an educational book. It should speak to the adventurous nature of the book while also letting people know that this is about life on Mars.

Other information: This is the second book in the Maurice on the Moon Series by Daniel Barth. The third book is due out soon.

More information can be found at MauriceOnTheMoon.com.

Attached is the first chapter of the book in pdf format.

Within a week, we had 23 designers submit close to 100 designs.

We had a few that we didn’t like at all so they were dismissed very quickly. We had about 3-4 designers that were pumping out some great designs – all completely different from each other. We ran all the covers we liked past a lot of 10-14 year old kids, our target market which helped us narrow down our design.

One great thing we found was that most of the designers welcomed feedback and continually strived to improve their covers.

After the first week, we extended our contest another week as new options kept coming in. We also upped our price to $349 as it would provide even more options for us. We didn’t want to cut our contest short just to get our book to market faster. We wanted to do it right.

We continued on providing feedback and ultimately selected the winning designer. What was nice was that even after we picked the designer, we had several more days to refine the cover to what we ultimately wanted.

The pros and cons of 99designs

So, we’ve kept you in suspense long enough. Below is the before and after covers. I think we can all agree that the new cover is a significantly better than the original cover.

* Note that we changed the title of the book. We will discuss the importance of that in another article. 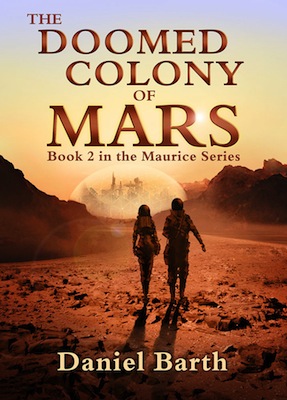 Funderstanding is a resource for teachers, parents, and students to stay up to date on education-related issues. The company focuses on innovative and progressive approaches to inspire learning in classrooms as well as homes.

How do you tell people about recent news and new products for your business? Don’t… Read More

Are you sure your tweets are effectively reaching people? Do you know how many times… Read More

Shelfari – Another Way to Promote Your Ebook

Enhance Your Book to Make it More Marketable In this day and age, you need… Read More